DAO Farmer — GameFi+DAO, Creating a sustainable ecosystem to ensure the continuity of the game 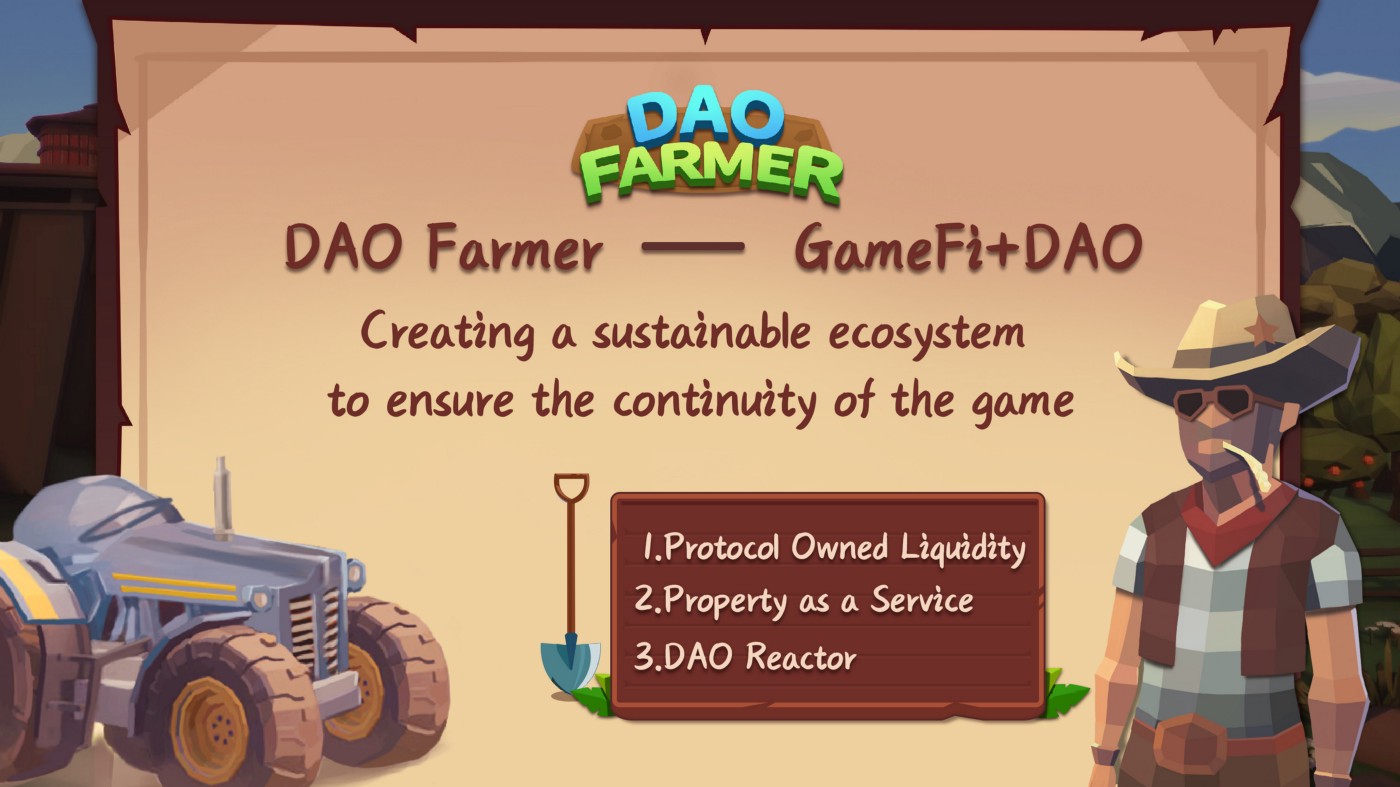 GameFi has exploded since September of this year and has become the hottest segment in the cryptocurrency world at the moment. According to Dappradar, a Dapp testing platform, as of November 29, 2021, the number of GameFi daily active users has reached 1.3 million, with a daily turnover of $123 million. Compared with the data on June 1 of the same year, GameFi’s user base grew nearly threefold in six months and daily turnover grew more than 15 times.

Let’s not talk about Axie infinity, the dominant player that lasted for more than two years, because Axie Infinity’s success is an inevitable development of the crypto market. But for GameFi to succeed, more innovations and leading protocols will need to emerge. As more and more players, especially from the outside of the crypto market enter the scene, countless projects in the appearance of a game are popping up.

It can be simply understood that the GameFi is more “grounded” than traditional DeFi and is easier to be accepted by the public.

Even if you don’t know blockchain or finance, you can make money by playing games which is attractive to many people and it can attract non-crypto players and capital investment with half the effort.

Ultimately, though, GameFi is similar to pledged liquidity mining where we need to lock in LP assets in a smart contract to receive revenue. But it’s worth noting that GameFi’s format is slightly different from DeFi mining: GameFi requires us to exchange assets for game props (NFTs) before we can participate in-game activities. The simple logic of selling NFTs for pledge mining has attracted a large number of users who have embraced GameFi because it caters to hot spots and super high returns. To capture the market, new and higher-yielding games were launched one after another with similar gameplay except for different backstories. But over time, the differences between GameFi and DeFi led to a change in player psychology. Players began to worry that if NFT could not be sold they would lose all their assets. Many players are not willing to face such exposure.

While established GameFi such as Axie Infinity do not need to worry about this situation since their economic system has been successful, a new and unfamiliar game can lead to the tragedy of NFT props having a price without a market and game tokens going to zero because its economic model is immature, resulting in the inability to get enough players and liquidity to support the game’s development. For example, BnBhero and CryptoMines, which relied on high returns to attract players some time ago, have seen their coin prices plummet along with massive output dumping and a sudden drop in player growth, with the former draining liquidity and the latter falling.

When the market dividend period slowly fades, the game with GameFi shell to rub the heat becomes no longer the first choice of users. After a long period of time, some projects with novelty began to appear slowly. The future of GameFi projects will need to be innovative if they are to stand firm and continue to grow.

DAO on the stage, a new process of DeFi development

GameFi is being updated at a rapid pace, and the DeFi board is on the same footing. People’s thinking about the drawbacks of DeFi combined with the DAO autonomy concept has led to the derivation of a new DeFi framework.

Liquidity has always been the cornerstone of DeFi, and securing it and improving it is one of the main goals of all DeFi programs. Simply put, I want to be able to trade at all times and want to make trading as cheap as possible, and I need strong enough liquidity on the other side.

If the blockchain market in the past was a train put together one car at a time, then liquidity providers were the rails that made that train fly. But the downside of this situation has gradually shown itself, as liquidity providers have dominated the life and death of DeFi projects since its inception. Often giant whales, large investors and lobbyists choose to move their money to where they get the most reward in liquidity mining rewards, but this also leads to the withdrawal of capital from liquidity after high returns, and a slow bleeding effect as tokens continue to be dumped on the market, which ultimately leads only to extinction. This phenomenon has been commonplace in the liquidity mining boom of 2020, and the current GameFi is much the same, except that capital is needed to buy into NFT game props, and the mining rewards become Play-to-Earn game rewards. And the current GameFi field itself is a top-heavy pattern, bursting into a minority of games, the vast majority of players are also attracted to enter after the big capital has entered the field to obtain high returns.

The problems GameFi is currently facing fall largely into this category and some GameFi already in operation such as Radio Caca are already experimenting with locked liquidity to try to solve the problem of game continuity but the drawbacks of centralization need no introduction here, so a DAO that combines Play-to-Earn + OlympusDAO Farmer is the game most likely to be the next breakout.

In the Newborn phase, DAO Farmer will be launched on the Binance Smart Chain (BSC) and is the first Play-to-Earn farm simulation game on BSC. In the Newborn phase, DAO Farmer is designed as a Play-to-Earn farm simulation game where players can complete the game process with simple actions to earn great rewards. 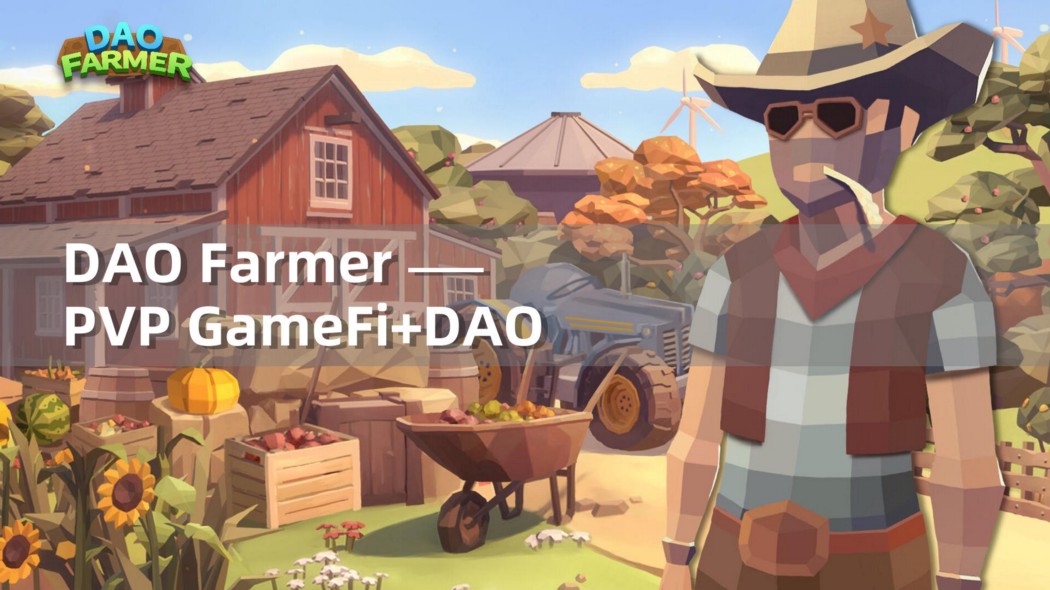 In this phase, players of DAO Farmer can get high returns with the tools. Backed by the mature GameFi ecosystem of BSC, DAO Farmer has a very low entry barrier. Currently, BSC is one of the most flourishing public chains of GameFi, with a large number of users and perfect DeFi infrastructure which ensures the number of users and token circulation of DAO Farmer. As the first simulation farm GameFi on BSC, it gives BSC an important role in this track and is expected to meet the market demand and further its scalability.

The tokenomics design of DAO allows DAO Farmer to have a perfect decentralized financial system in the newborn phase. 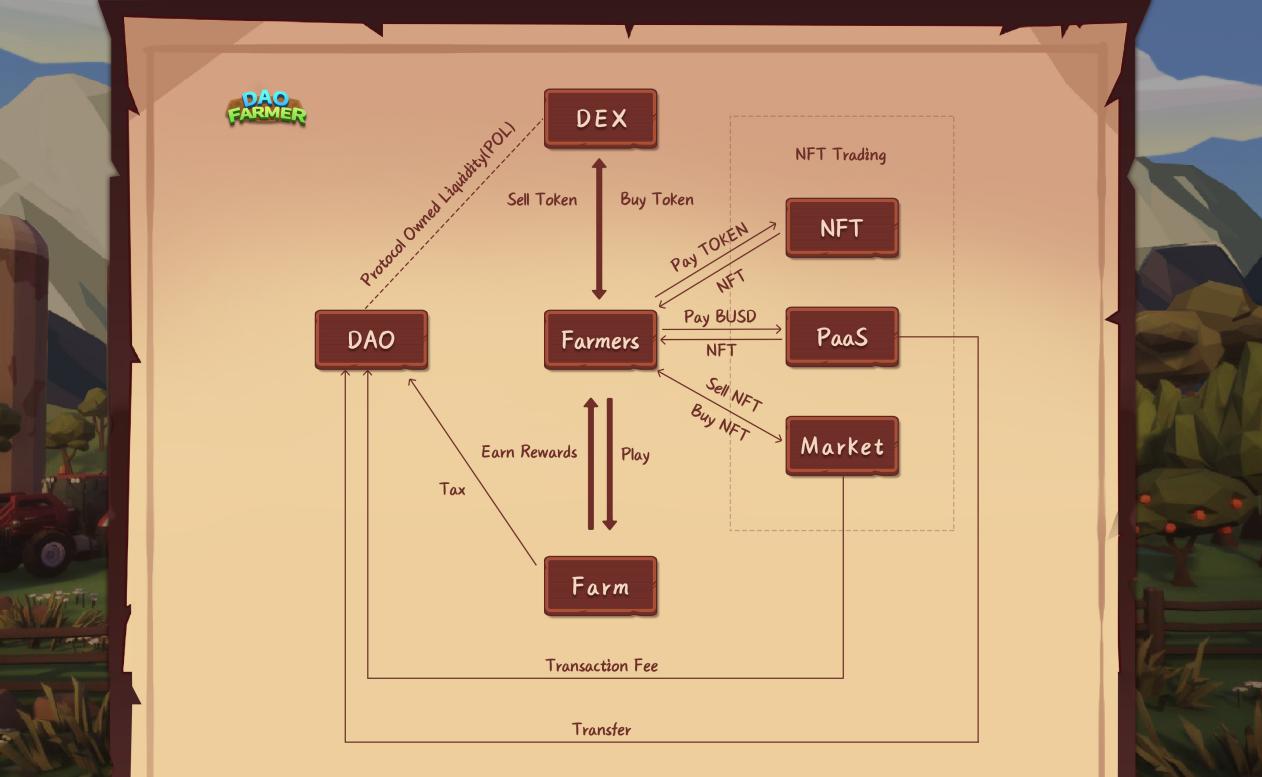 Simple understanding, in DAO Farmer each time the player’s Claim, there will be part of the fee will enter the DAO vault, early through the DAO vault sales of game assets, will also all enter the vault, this part of the income is all through the protocol injection pool and can not be actively controlled, which means that never lose liquidity, the player’s game assets will have a net value to the bottom.

Too much liquidity can ensure the circulation of tokens, but it can also cause slow growth of players’ revenue. The token DAO Reactor can be a good solution to this problem. Players can buy DAOF with token Liquidity Provider (LP) or specified tokens and holding DAOF can provide players with a revenue growth rate. The existence of the token reactor can largely make up for the lack of Protocol Owned Liquidity (POL) presence and increase the scope of control over liquidity. It also increases the player’s earning and the output is converted into earnings, forming a gain closure loop. 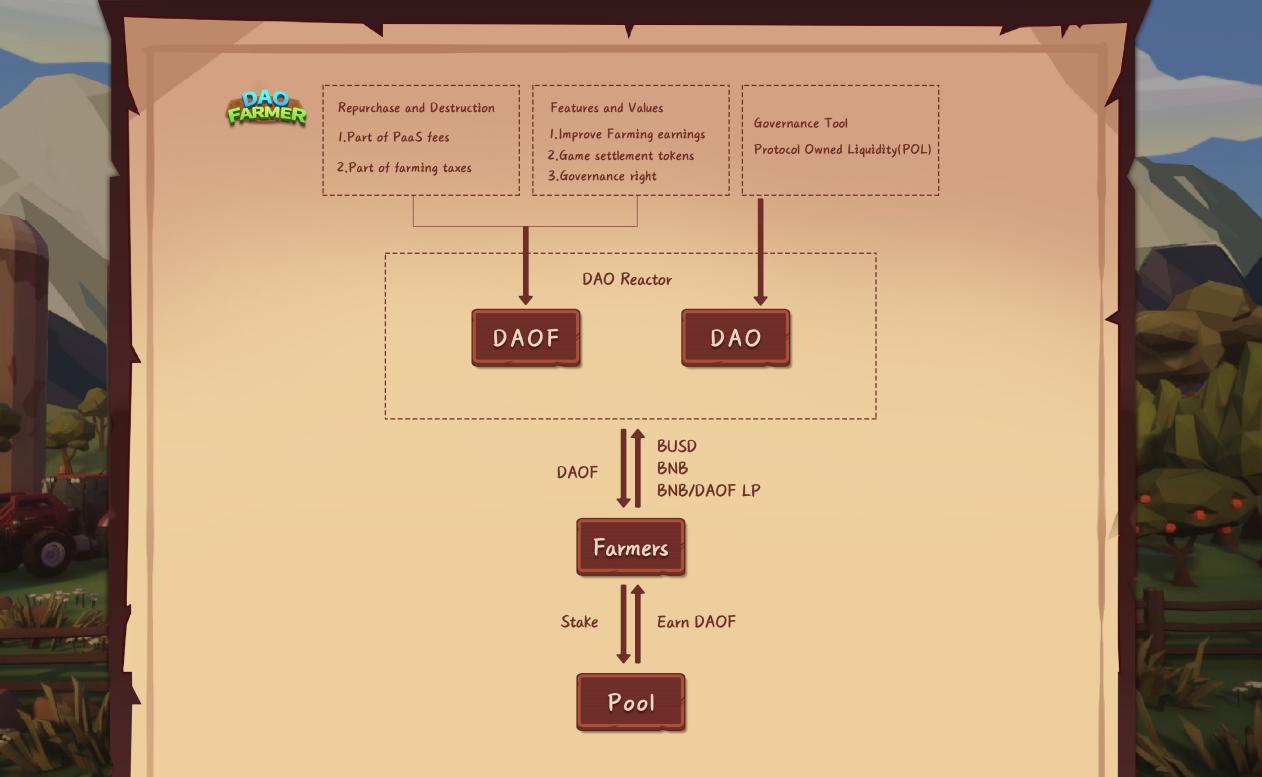 Protocol Owned Liquidity (POL) and Property as a Service (PaaS) ensure the liquidity of the game’s assets, while the existence of DAO Reactor can largely compensate for the shortcomings of POL by providing a more reasonable incentive for liquidity providers to form a long-term mutually beneficial relationship with the agreement. DAO Reactor provides the financial system. The tight economic model has a positive effect on the sustainability of DAO Farmer, ensuring a longer game lifecycle, which is the basis for the later development stages of the game.

In the Rising phase, players are no longer limited to their farms but will compete with all players across the continent. In this stage, players need to have enough time to upgrade and operate their farms and expand them into their city-state. In the Arrival phase, players will no longer use the mouse and keyboard to play the game but can use VR and physical devices for an immersive gaming experience.

The novel combination of GameFi+DAO is the first of its kind in the industry, and DAO Farmer has a rigorous economic model to ensure the sustainability of the game. DAO Farmer has a unique advantage in the new phase of GameFi environment change, and will certainly explode the GameFi market.